So What’s The Deal With…Applying for Filmmaker Workshops? 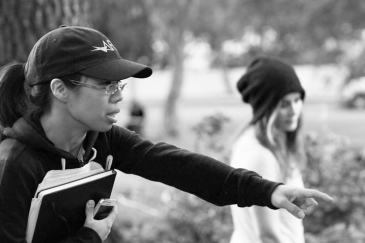 I first met Erin Li when both of our films screened at Urbanworld Film Festival in 2011. Her intriguing short “L.A. Coffin School” and vibrant passion for filmmaking convinced me she was definitely one to watch. I recently reached out to Erin because I wanted to pick her brain about her successful experience with filmmaker workshops. As a 2012 Film Independent Project Involve Fellow she directed and co-wrote  “To The Bone”, which played at LA Film Festival and Slamdance. “To The Bone” was chosen as a Vimeo Staff Pick and recently featured on Upworthy. She’s now in post-production on “Kepler X-47” as part of AFI’s Directing Workshop for Women. You can also catch her on Twitter at @MsErinLi. A big thank you again to Erin for sharing her insight! — Christina B.

What specifically drew you to apply for Film Independent’s Project Involve program and AFI’s Directing Workshop for Women?

Erin: Both programs support and champion diverse and underrepresented members of the filmmaking community.  To have organizations recognize the severe lack of gender equality and diversity, both in front and behind the camera, means a lot.

Film Independent Project Involve (FIND PI) and American Film Institute’s Directing Workshop for Women (AFI DWW) support you as a filmmaker, build upon your film education and expand your network, and ultimately, aim to diversify the landscape of the film community.

Did I mention that both programs are free?

Can you breakdown exactly what a filmmaker goes through as a PI Fellow? As a participant in AFI’s Directing Workshop for Women?

One of the best parts of being a FIND PI fellow was meeting other fellows.  As a filmmaker, you’re always looking to collaborate and connect with like-minded people who you vibe with on a professional and personal level.  So I feel really lucky to have found that at FIND PI, and have gone on to collaborate with several PI alum on multiple projects.  You also become a part of Film Independent’s extended family, which is priceless.

As a FIND PI fellow, you are also invited to private seminars and Q&As.  They are usually conducted in small, informal settings so you get to hear the real deal.  In my year, some of the guests were: Mike Mills, Stephanie Allain, Dee Rees, Nekisa Cooper and James Schamus.

Finally, there is a hands-on short film component in which you come up with a concept and submit treatments based on a given theme.  Select treatments are then chosen to go forward into writing, development, and ultimately production phases. In my year, there were eliminations in each round, and directing fellows were not guaranteed the chance to direct.  You have to pitch to direct a project, even if it was a script you wrote.  It definitely simulated a real-world environment; nothing is handed to you.  To the Bone was ultimately greenlit – I’m so thankful to everyone at PI and my collaborators for believing in my vision and providing the opportunity to bring this film to life.

I am currently in AFI’s Directing Workshop for Women and am in the post-production process for KEPLER X-47.  AFI DWW’s month-long immersive directing bootcamp was invaluable.  Top industry working professionals who truly respect and are invested in the program, many of whom were also AFI alumni, came to guest teach and were generous with their knowledge, advice and time.  One of my favorite classes was taught by Deborah Nadoolman Landis, who was the Costume Designer for “Indiana Jones: Raiders of the Lost Ark,” “Animal House,” “Coming to America,” and Michael Jackson’s “Thriller,” to name just a few (yes, she picked out that unforgettable red leather jacket).  She asked each of us to describe, from our feet to our heads, where (city, country, store, etc.) and when (the year) we got the article of clothing, and how much we bought it for.  And in describing these articles of clothing, we each revealed our own personal history and got to know one another more.  It changed forever how I look at costume design and how essential it is in bringing a character to life.  I also loved Joan Darling’s acting workshop and Bruce Block’s class on visual storytelling.

Do these types of film support environments have an impact on your work?

KEPLER X-47 is the most fantastical film I’ve directed to date.  It is a dystopian sci-fi film about a woman trying to escape a human zoo on an alien planet.  Just some of the elements involved were: Rococo / Late Baroque costumes (think Marie Antoinette), glass walls, VFX, a post-apocalyptic world, and who could forget – aliens!  As an emerging filmmaker, having a stamp of approval from organizations like AFI, Film Independent, and Visual Communications helps to validate your film, concept and script to the rest of the world.  This makes a tremendous difference when recruiting potential cast, crew, and investors.

When you are working on a script or film, sometimes it is difficult to obtain distance from a project that you are so close to.  The other seven participants in the AFI DWW are so talented – each artist with her own strengths to bring to the table.  I felt very lucky to be able to get to know them, and to get their feedback, especially during the script development phase.

I should mention that Visual Communications (VC) was the first organization to support my work; they selected me for their Armed with a Camera (AWC) fellowship program a couple years ago.  VC picks about eight fellows each year and funds their shorts.  These films are eventually screened at the annual Los Angeles Asian Pacific Film Festival at the DGA, which is a thrill in itself.  I’ve gotten to know other filmmakers and made new friends through VC and AWC, and we continue to support one another’s films.  I was on this year’s selection committee, so it has been fun and rewarding to be able to give back and be on the other side.

Number one piece of advice for folks hoping to make themselves and their workshop/ fellowship applications really stand out?

Erin: Keep on creating and learning.  Work on your craft, and figure out who you are as a filmmaker and artist.

Along the way, be prepared for the journey, and try to enjoy it, because it will be a long one.  Find like-minded collaborators who you enjoy working with, because you will be spending a lot of time with them. What’s the point if you’re not having fun?  At the end of the day, the journey is the thing that sticks with you the most, not necessarily the finished product.

Completing a short film is great (of course), but are there any other rewards to this particular route of honing one’s craft?

Erin: Short films present some amazing opportunities.  No, they probably won’t make you rich, but below are just some of the benefits of making shorts:

1. Experiment and take risks.  Most likely, you don’t have a studio or investors to answer to… just your pocketbook.

2. Develop your voice as a director.  What is unique about you?  What you want to say as an artist?  Your films?

3. Connect to audiences, build a following.  You get to put yourself and your work out into the world in a relatively short amount of time (compared to features), and see how audiences react.

4. Meet potential repeat collaborators.  On every film, I meet more crew members who I just click with.

5. Work on your soft skills.  At least 50% of directing (probably more) is comprised of working with and managing people.

Have you ever applied or thought about applying for a film workshop? Any questions for Erin about her experiences so far?